Since the inception of the State of Israel, two approved outlines have been drawn up for Jerusalem: the original was a plan by Heinz Rau issued through Israels Interior Ministry, and the second was Plan 62, authorized in 1959. Both plans limited the opportunities for Jerusalem’s expansion. Since then no other plan has been authorized to regulate the city’s development.

In 2001, an attempt to address previous planning needs came in the form of a suggested city Outline Plan entitled Jerusalem 2000. Though it too was ultimately felled by debate and not accepted authoritatively, its attempt to finally replace Plan 62 was significant, and of tremendous import in the formulation of Jerusalem 5800. 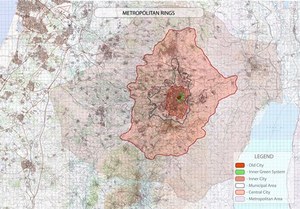 The Jerusalem 5800 plan differs from previously attempted municipal plans in that its success is not contingent on authorities advance acceptance. Previous plans, it should be noted, were most often felled by a single point of contention, which led to the abandonment of the entire plan. Instead, the 5800 plan is divided into a myriad of independent projects – each of which may be proposed and adopted on its own merits.

The premise of 5800 is that together, the successful implementation of these individual investments meshes cumulatively resulting in the plans preeminence, and a very different Jerusalem by 2050 than the city that exists today. Further, the plan does not only focus on the city of Jerusalem, but its metropolitan area as well, which will shape Jerusalem into a true World City with a robust economy to the benefit of all its residents.