Udi has worked with the 5800 team over the past 7 years executing and managing various programs envisaged by the planning and research teams that contributed to the original effort. Udi is an experienced CEO working in media, tourism and property development. His wide ranging exposure to many industries provide a solid base for the ongoing efforts of the 5800 team to bring elements of the vision to fruition.

Each member of this team has more than 30 years of planning experience in Israel. 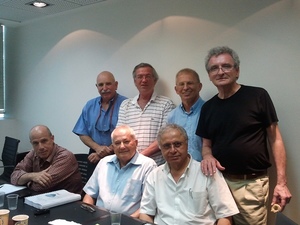 A graduate of Israels esteemed Technion, a trained architect and city-planner in private practice and renowned throughout Israel as the head planer of such Israeli cities as Acre and Kiryat Ono; as the top planner brought in by the government for the ambitious creation of a string of man made islands off the coast of Tel Aviv; as well as Tel Avivs central Ayalon Park; planner for major national initiatives such as the Peace Valley Plan-Dead Sea canal and the City of Lagoons in northern Eilat, as well as head architect for several internationally recognized hotels such as the famous Hilton Queen of Sheba, and the Herods hotel, both in Eilat.

A graduate of the prestigious Technion Israel Institute of Technology. After several managerial positions in prominent Israeli hotels, Lees went on to become joint managing director of the Isrotel Hotel Group in Israel; credited with bringing the new hotel group to a leading position in the Israeli hotel industry and setting new standards of hospitality.

With his vision, the Isrotel chain was one of the first hotel development and management groups to introduce multiple hotels to the Israeli port city of Eilat, turning it into one of the most popular tourist destinations in the Mediterranean.

Former Director of the Jewish National Funds extensive network of forests and parks in the Jerusalem region, currently in private practice as an adviser for environmental issues and green spaces.

Yair Duchen (economics), a professor of economics at Hebrew University. Duchin is known throughout Israel, often consults for the government on matters relating to Israel’s employment and judiciary system, and was chosen by the government to lead an internal inquiry into remedying the crisis in Jerusalems residential sector.

A trained city planner and Cultural Heritage conservation specialist, Solar has been in private practice since 1975, working on different projects in Israel and abroad. He is the original founder and director of the Israel Antiquities Authority’s conservation department and of the Getty Conservation Institute’s Field Projects Department. Currently, he is a Liaison Officer of ICOMOS with UNESCO, and a internationally sought advisor on World Heritage issues, as well as a member of the team preparing Israel’s Strategic Plan for Conservation of Heritage.

Shimon is the CEO of Landuse Transportation Planning LLC, Israel’s most commissioned firm for highway and roadway planning, by clients that include such agencies of the Israeli government as the Ministry of Transportation, the Israeli Ministry of Defense, the Ministry of the Interior, Ministry of Construction and Housing, Ministry of Foreign Affairs, and numerous local and regional councils throughout the country. Amongst his hundreds of projects, Simon is also responsible for Israel’s cross-country freeway (Road 6), and the capital’s most significant transportation project as well: the new ‘Jerusalem Light Rail. Simon’s reputation has also spread internationally, with his work reaching as far as Indonesia, Kiev, Budapest, Romania, and Moscow.

An MSc with degrees in Engineering and Mathematics, Yakov has headed the engineering departments of numerous companies, including the international Tadiran Communications Ltd, and is on the Board of Directors for Israel’s National Electric Company, as well as the Chairman of its Computerization Committee. Yakov was the first mayor of the Israeli city of Ariel, and was responsible for building the city’s infrastructure and planning systems from the ground-up, as well as starting a political party in the 1996 Parliamentary elections. For the past thirty years, he has been researching, lecturing and reporting on the demographic development of Israel and is frequently quoted and published in both Israeli and International arenas, as well as serving as the Demographics Consultant for Prime Minister Benjamin Netanyahu.