Four metropolitan ‘hubs’ exist in Israel as of 2010: Tel Aviv, Israel’s main economic ‘hub’; as well as Haifa, Jerusalem and Beer Sheva each relatively smaller than Tel Aviv, but with potential for significant growth.

The Jerusalem 5800 vision foresees a fast transportation link between the four centers, creating a “multi-city network” that will function as a single extended metropolitan system, with each city maintaining its unique features and functions. From these transport hubs, outward connections via sea and rail will branch out to key regional centers including Amman, Cairo, Beirut and Damascus. 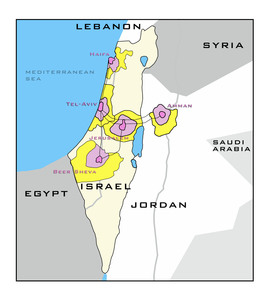 Jerusalem will retain its special character as Israel’s national capital and as the international destination for spiritual and cultural tourism, and together with Tel Aviv, serve as the primary, multifaceted epicenter of the country.

Through successful implementation of the 5800 vision, Jerusalem will come to epitomize the optimal convergence of ideological and material views. This unique synergy will positively influence Jewish immigration to the country and increase Israel’s importance on the world scene. Jerusalem’s global function as the world’s spiritual and cultural center will bring material wealth to the people of the region, thereby setting the bar and becoming the defining vision for the Jewish people in the Jewish State.