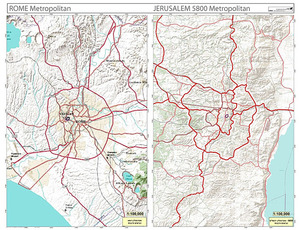 From Jerusalem to Rome and Back

Jerusalem 5800, also known as Jerusalem 2050, is a private initiative, founded by Kevin Bermeister to enhance the present and future city of Jerusalem and the lives of its residents.

Through proper long-term urban planning based on solid economic principles and benefits, Jerusalem 5800 will uncover Jerusalem’s innate potential as a true ‘World City’ and tourist destination capable of attracting more than ten million tourists a year.

Being that Jerusalem 5800 is currently privately funded, it is able to work in conjunction with all the major municipal and national government agencies, while remaining unhindered due to its apolitical status. As such, 5800 planners receive numerous requests from government agencies for assistance in improving coordination for regional planning projects. Furthermore, Jerusalem 5800 is the first plan to include projected statistics and proposals up to the year 2050, making it the only long-term plan and the largest collection of plans ever compiled for the city.