Peace through economic prosperity is the central theme of the Jerusalem 5800 plan. Economic prosperity can be a pillar to building a lasting peace, much more so than elaborate plans for dividing a city which is in need of unity and growth. By bringing out the great inherent potential of Jerusalem’s economy, Jerusalem will become a true ‘World City’, enhancing the lives of both visitors and residents.

A basic assumption for optimal function of the Jerusalem metropolis as an urban space is the free movement of people and merchandise regardless of the population distribution and political arrangements. Jerusalem will be an open and continuous city, offering free movement to all its residents and the millions of tourists who visit the city each year.

Visitors and residents will be able to take advantage of Israel’s beauty, archaeology, spirituality, and clean ecology via gardened parks and green corridors. A ring of parks surrounding and distributed throughout the city will facilitate walking tours, bicycles and personal electrical means of transportation, and provide accessibility to centers of culture, tourism, conventions and attractions to instill in the city the character of its surrounding rural villages, and its inherent biblical heritage. The area of the Old City and the Holy Basin will be closed to vehicular traffic and will be an open pedestrian park, with additional access via underground metro. 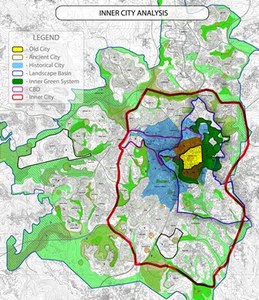 In order to maintain Jerusalem as a city of 12 million tourists (10 million foreign, plus 2 million domestic), and over 4 million residents, Jerusalem 5800 is committed to establish maintainable ecological parameters so as to ensure its sustainability and minimize the ensuing environmental impact.

In the developing post-industrial era of the 21st century, demand for uplifting cultural or educational experiences is expected to rise, increasing the economic prospects and significant growth in the demand for spiritual as well as educational tourism throughout the world, and at its center – Jerusalem.